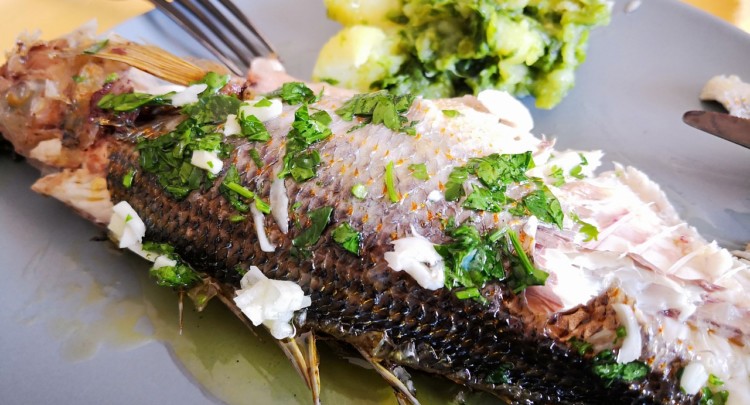 The Mediterranean diet, among the healthiest in the world

Hello and welcome to the summary and introduction of the Mediterranean diet, which is one of the pillars of the Blooness Guide, the guide to the ideal diet.

The Mediterranean diet is correlated with good cardiovascular health, remarkable longevity, and good physical and mental health. As a result, it continues to fascinate dieticians and nutrition enthusiasts alike. In fact, the Mediterranean diet, along with the Okinawa diet, are considered the two best diets in the world today, by a large part of the scientific community.

For our part, we have tried to take the best of this diet, in order to enrich our guide, and to take advantage of all the virtues brought by this diet in the framework of an "ideal human diet". Indeed, empirically, it is possible to take and list the foods consumed in the Mediterranean regions, and which are known to be vectors of good health for the populations living or having lived in the areas bordering the Mediterranean, at a time when they were still spared from mass consumption and industrial products.

By making an inventory of the world's healthiest foods and integrating them into our daily lives, we are helping to improve our overall health. This is what we will try to do in this large part of the Blooness guide, the guide to the ideal human diet.

But just before drawing up this list, and dedicating a separate chapter to each major group of ingredients, we could not approach this major theme without introducing it properly. First of all, by defining what this diet consists of, how it differs from, but above all how it relates to, the low-carb diet, which is also one of the pillars of the guide, and by quickly recalling its virtues and its history.

Let's start with its virtues, because if this food has a good press, it is good to remember why.

What are the virtues of the Mediterranean diet?

3/ Protection against high blood pressure: HPA is an excessive rise in pressure in the arteries, a rise that persists over time. It is the most common chronic disease in the world, and its consequences can be very serious.

10/ Decrease in the risk of Parkinson's disease

11/ Reduction of obesity and weight loss

12/ Reducing the risk of gout

Moreover, according to the scientific data that continue to pour in, people with Mediterranean eating habits have less cancer, inflammatory diseases, overweight, metabolic syndromes, etc...

In fact, there is no one diet to follow that would objectively and safely achieve health goals with a promise of results. On the one hand, because there are several Mediterranean diets, and on the other hand, because the studies are based on observations.

However, on a practical level, the method used by various nutritionists is to imitate the traditional dietary practices of certain Mediterranean peoples in order to reap the health benefits.

The application of this diet has a clear objective, even if it is not guaranteed: it is toextend life expectancy by protecting oneself from cardiovascular diseases, the risk of cancer and other degenerative or metabolic diseases. In other words, it consists of providing the body with the food consumed in Mediterranean areas where, during the 20th century in particular, remarkable life expectancy has been observed, with a limited occurrence or even absence of certain diseases that are common elsewhere in developed societies, and all this despite a sometimes rudimentary health system.

Definition of the Mediterranean diet

In other words, the Mediterranean diet gives pride of place to fruit, vegetables, legumes, wholegrain cereals and fats, particularly olive oil. It is a diet that could almost be described as "flexitarian", in the sense that a large part of its intake is made up of plant proteins, provided by the high consumption of legumes and whole grains.

The Mediterranean diet favours the consumption of vegetables, quality fats, mainly polyunsaturated, and whole grains. Conversely, red meat, sugar and industrial products, which form the basis of the modern Western diet (and not only), have a very limited place.

In addition to the nature of the food itself, the way in which it is grown, and therefore its quality, should also be noted. Thus, in the Blue Zones in general, and of course in the Mediterranean, food comes from local, seasonal agriculture, with traditional processes and relatively limited food processing . As a reminder, Blue Zones The Blue Zones are a concept that groups together areas of the world where life expectancy is well above the world average, and where "civilisation diseases" (diabetes, cancer, hypertension, thyroid, etc.) are rarer than elsewhere. We can consider that a large part of the Mediterranean is part of these Blue Zones.

Secondly, beyond diet, the researchers also described the Mediterranean lifestyle, which is similar to that of the Blue Zones. This lifestyle is characterised by frequent and moderate physical activity, exposure to the sun, attachment to the community and, more generally, a joie de vivre.

Finally, the Mediterranean diet is not a weight-loss diet, it is mainly oriented towards good health. However, one of the collateral consequences is precisely a loss of weight, in the long term, for people who are overweight. 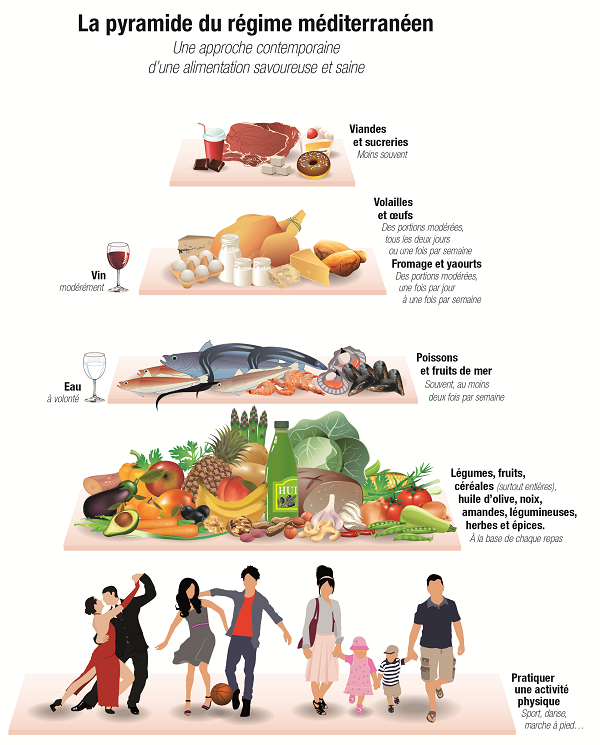 The "Mediterranean diet" was inscribed on 16 November 2010 on the Representative List of the Intangible Cultural Heritage of Humanity by UNESCO as a "set of skills, knowledge, practices and traditions".

The origin of the Mediterranean diet

It was once known as the "Cretan diet". It was made famous thanks to the work of two doctors and scientists: Serge Renaud, then Michel de Lorgeril, who conducted, with the help of other scientists, the famous Lyon Diet Heart Study.

This study tested the effectiveness of a Mediterranean diet on 600 patients who had survived a myocardial infarction over nearly four years. A control group followed the recommended nutritional advice to reduce cholesterol, and an experimental group followed a Mediterranean diet. The results were clear. There was a 50-70% reduction in the risk of heart attack in the experimental group, fewer cardiovascular complications (pulmonary embolism, stroke, etc.), fewer cancers and an improvement in life expectancy.

Other studies have since confirmed the hypothesis that the Mediterranean diet is beneficial for general health.

In terms of food alone, does this mean that we have to copy exactly the food that is eaten in these regions? What about quantities? How do we go about it? Things are actually not that simple, and we will clarify these important questions later. Before that, let's look at how the Mediterranean diet differs from the Low-Carb diet promoted in this guide, and what the link is between the two.

As mentioned in the preamble, the Mediterranean diet has been recognised as one of the healthiest in the world. However, fat can make up to 40% of the macronutrient intake in this diet (contrary to those who still believe that fats are harmful to health), which is consistent with what has been stated in this guide so far.

However, a significant proportion, up to about 30% of calorie intake, sometimes more, can come from carbohydrates (which might surprise the most assiduous low-carb dieters).

This fairly even distribution of protein, carbohydrates and fat might disconcert many advocates of the keto or low-carb lifestyle. However, the subtlety of the Mediterranean diet is that it provides the body with a very good quality carbohydrate intake, unlike the carbohydrate-rich foods frequently consumed in modern societies since the 1960s.

As a result, this way of eating has much more in common with the low-carb diet than it seems. In both cases, the emphasis is on good fats and quality proteins, and all this at the expense of sugar and bad carbohydrates.

Although the Mediterranean diet is indeed richer in carbohydrates than the generally practised low-carb diet, it favours good quality, low to moderate glycaemic index carbohydrates and is consumed within the framework of a Mediterranean lifestyle, as described above, i.e. a lifestyle characterised by frequent and moderate physical activity and openness towards others.

In other words, the carbohydrates provided by the Mediterranean diet have nothing to do with those we are used to consuming in developed Western countries. Gone are the white rice, white pasta, industrial noodle soups and white burger buns. In the Mediterranean diet, preference is given to legumes, wholegrain cereals, or even fructose provided by some fruits. This type of carbohydrate, as we saw in the chapter on glycaemic indexes, does not disturb insulin, nor does it erode its effectiveness. On the contrary, they are released more slowly in the body and are much richer in protective nutrients than the "processed" carbohydrates as we know them.

Finally, Mediterranean populations used to work outdoors and be active, the exact opposite of the sedentary lifestyles that have developed with the tertiarisation of developed countries. Therefore, these low-GI, good quality carbohydrates can only be welcomed by the body, which in a way, to illustrate the point, burns them without any scruples. Where carbohydrates from refined and processed ingredients, consumed as part of a sedentary lifestyle, can only lead to overweight, uneven energy, mood swings and long-term health problems.

Therefore, once these reminders have been made, we can consider that the Mediterranean diet is in a way a low to moderate carbohydrate diet, and that it is characterised by a quality carbohydrate intake, which changes everything in terms of the way we approach carbohydrates and their energy impact on the body.

Indeed, there are different ways of eating low-carb. We can eat two hard-boiled eggs in the morning, chicken breast and a portion of lentils at lunchtime, toasted and salted almonds in the afternoon, and canned tuna with microwaved broccoli in the evening, without seasoning or spices. It's low-carb, but tasteless, deprived of healthful nutrients, and the antithesis of the Mediterranean diet. Moreover, it is not sustainable in the long term, because pleasure and the awakening of the senses are part of an ideal diet, and indispensable for health and mood. This is what the Mediterranean diet will provide, if only because of the quality and originality of its ingredients.

As for the question of how much carbohydrate to allocate in a Mediterranean diet where we don't want to gain weight - and this is a sensible question - it will depend in practice on your energy expenditure, your experience, your feelings, the season, the stress of the moment, and many other parameters. This is a technical and important subject to which we will return later.

In the meantime, let's start with the basics, and look in detail at the foods that are consumed in the different regions of the Mediterranean, grouping them into food families.

Summary of the Mediterranean diet guide